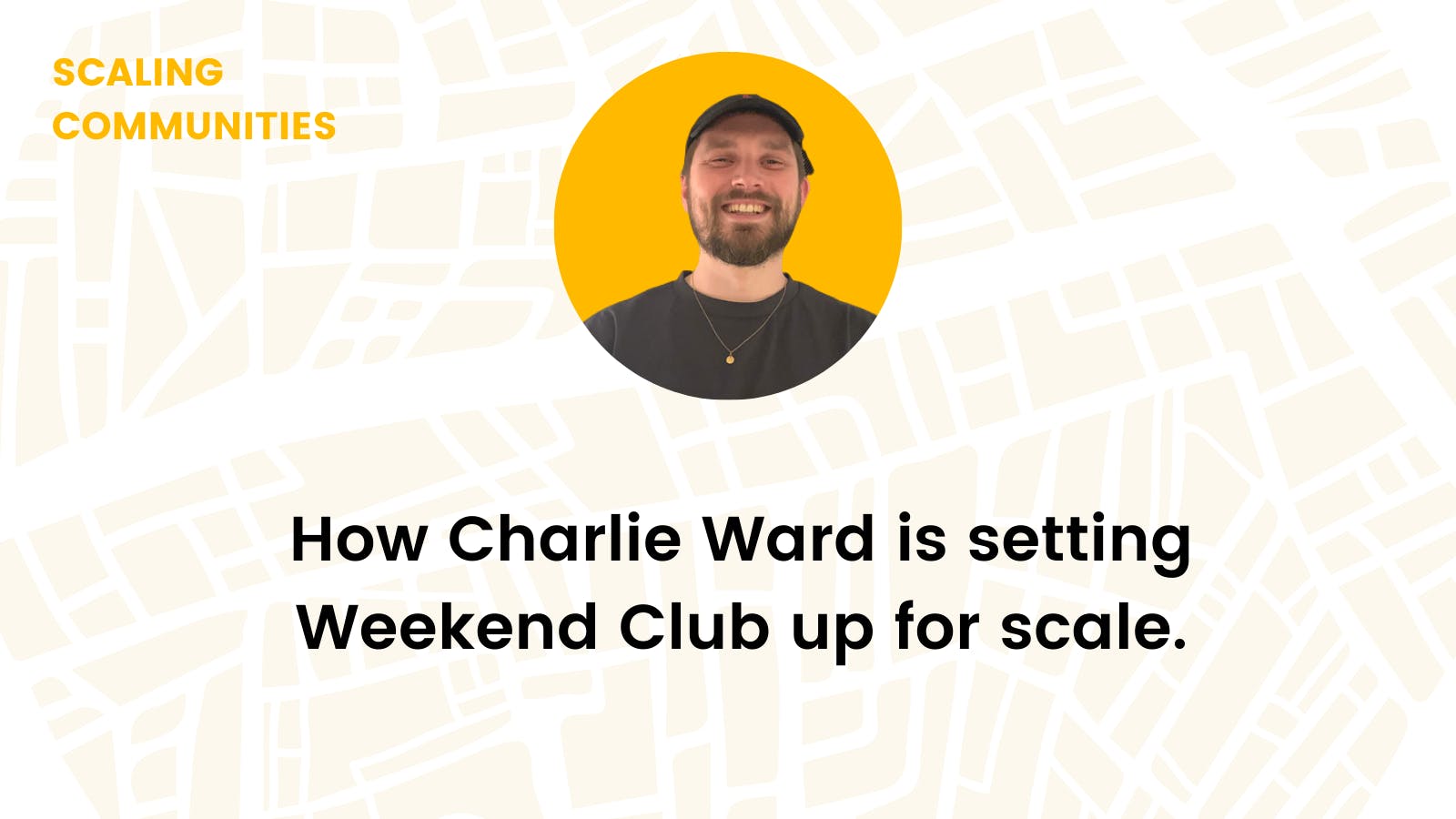 In our first issue of Scaling Communities we interview Charlie Ward; the founder of Weekend Club.

What was the origin story behind Weekend Club?

I ran a meet-up for Indie Hackers in London (called IndieBeers) each month. After a while people started asking me to setup a Saturday event where we'd hack on our projects together, and Weekend Club was born (originally in a co-working space, long live Ministry of Startups). After COVID hit in March 2020, we pivoted remote, and a year or so later, here we are!

Originally it was purely a space for bootstrappers to meet, work on their projects together and have fun. Now I'd say it's more than that - it's a community to help people escape their day jobs, become independent and make an arduous journey much easier by supporting each other.

How would you describe Weekend Club to folks who've not heard of it before?

We're on a mission to make the bootstrapper journey easier by connecting founders to share knowledge, support each other and enjoy the ride.

At a more granular level, that means we're a remote co-working space (on Slack, Zoom and Notion). Our regular events include stand-ups, office hours, retrospectives and educational sessions throughout the week to help founders make friends, stay accountable and learn from each other.

This also includes Saturdays (on Americas and EMEA time), which is probably what we're best known for. I think we're still the only remote community running weekly, all-day Saturday co-working sessions.

We also offer 100+ software discounts on things like Stripe, Savvycal, Notion and more. One of our members told me he makes a profit on Weekend Club every year from this 😆 But don't listen to me, our members (aka 'Weekenders') tell it better than I ever could here.

When did you realise it was time to start thinking more intentionally about scale?

At the point we became a remote community, I realised I'd only really done this in-person before. So my first thought wasn't about growth, it was 'how do we create an experience people tell others about?' The first 6 months were about putting ourselves in a position to grow later, because first we needed to be:

It was a long journey, but we eventually reached this point.

How are you approaching the process of making Weekend Club more scalable?

There are probably two main philosophies I have here, which are kind of at odds with each other:

What are the most value unlocking initiatives or strategies you have implemented to scale your community so far?

These were the biggest potential points of failure, and what we did to unlock being able to scale:

How do you intend to maintain Weekend Club's secret sauce at scale?

What tools have helped your community the most up to this point and which do you anticipate using to help you scale?

What unscalable things do you still do?

These are the main things I still do myself:

Key takeaway you'd want other community builders to take from this interview?

Scalability is important, but not everything should be scaled. Also pick a few key parts of the experience that you can make super personal and memorable.

What have been the most influential books, podcasts, or other resources around scaling that you'd recommend?

These two aren't so much about scaling, but I think they're important anyway:

What would happen to Weekend Club if you won the lottery? (in this hypothetical scenario, rightly or wrongly, we're assuming that you'd stop working on Weekend Club)

Great question! I might be cheating here, but I think I'd actually continue working on it, but just do a bunch of stuff I don't have the resources to do. Like hire a giant bouncy castle and fly all our members in.

But if for whatever reason I couldn't still work on it, I like to think it'd continue. But I'd need to do a bit of work to ensure that was the case first! I'd likely hand it over to an existing host/member, perhaps turning it into some kind of DAO (Decentralized Autonomous Community), which I think could be pretty fascinating. The key would be creating some kind of incentive structure that made it work. The $WEEKEND token has a nice ring to it.

How can people reach you on the Internet?

Charlie's Twitter, Linkedin and of the course, Weekend Club

Thank you for subscribing!